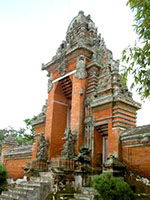 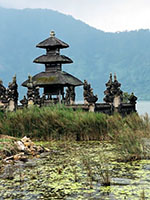 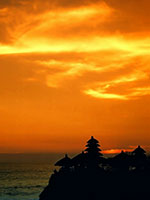 Departure Time: 8:30am (Full Day Tour)
Duration: Approx 9 Hours
Rate: 1-3 Persons US$ 50  •  4-6 Persons US$ 55
Besakih Temple is perched high on the slopes of Mount Agung, (3031m) the highest peak of ball. Thus it is considered to be the holiest place in Bali. This is Bali’s Mother Temple, the biggest, the most important and the holiest temple on this island. It is perched at 1000m. On the way to get there, we will stop at Tohpati, the centre of Balinese hand weaving and hand batik process. Then we will proceed to Klungkung, the old capital of Bali (1740-1908) to see the court of justice (kerta gosa) and floating pavilion (bale kambang) whose murals are decorated by the best examples of classical Balinese painting. Afterwards,we will stop at Bukit Jambul “the crested hill” with nice view of terraced rice fields.

TOHPATI VILLAGE
Tohpati Village is famous for Bali’s hand Batik and traditional hand Weaving Center. Batik is a traditional form of painting fabric. They painstakingly use dots and lines from wax to decorate the cloth. It is very impressive to witness their process of making batik.

BESAKIH TEMPLE
…is the biggest Hindu temple in Bali which the local people call Pura Besakih. It owns beautiful view from the top of temple area where we can see the wide nature panorama until to the ocean so that way this temple is many visited by tourists from all over the world. Besakih Temple is located in Besakih countryside, Rendang sub district, Karangasem regency, east part of the island. It is located in southwest side bevel of mount Agung, the biggest mounts in Bali. It is because pursuant to Agung Mount confidence is holiest and highest mount in Bali Island.

Bali’s “mother temple”,Besakih temple, is over 900 metres up the slopes of Gunung Agung. It has been regarded as a holy place since pre-historic times in Bali. The first recorded mention of its existence is from an inscription that dates from 1007 A.D. Since the Gelgel dynasty of the fifteenth century it has been regarded as a central, holy temple for the entire island. All the allegiances of the Balinese people come together at Besakih. Each regency has its own temple within the over-all compound, as do each of the caste groups. There is a total of 18 separate sanctuaries. The three main temples are : Pura Penataran Agung, Dedicated to Sang Hyang Widi Wasa : Pura Kiduling Kreteg, dedicated to Brahma; and Pura Batu Madeg, dedicated to Wisnu.

To the Balinese a visit to the temple sanctuaries at Besakih temple is a special pilgrimage. Each temple has its own odalan, or anniversary celebration, and on the full moon of the Balinese month “Kedasa” the entire compound of Besakih celebrates the visit of the gods, with an enormous throng of visiting pilgrims.

KLUNGKUNG
Klungkung, forever made its mark in modern Balinese history when in 1908, it was the last kingdom holding out against the Dutch invaders. Hopelessly outnumbered and outgunned, the King of Klungkung (the Dewa Agung or great god) led 200 members of his family and court in a puputan (ritual march to death), into the face of the Dutch guns. All of the group were either killed or committed ritual suicide.

BUKIT JAMBUL
The Baukit Jambul rice terraces are the best in bali. This very famous stop point on Tour Programs. There is a local restaurants offering best selection of Indonesian and international menus for tourists . The tourist will be pampered by the beautiful scenery with amazing panorama including the fresh tropical atmosphere sweep the entire area.